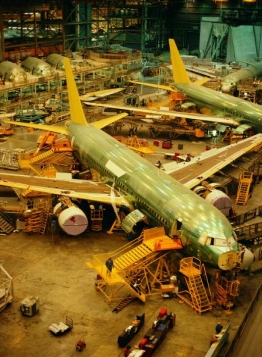 In 2012, the U.S. aerospace industry contributed $118.5 billion in export sales to the U.S. economy.  The industry’s positive trade balance of $70.5 billion is the largest trade surplus of any manufacturing industry and came from exporting 64.3 percent of all aerospace production.

Foreign firms are attracted to the U.S. aerospace market because it is the largest in the world and has a skilled and hospitable workforce, extensive distribution systems, diverse offerings, and strong support at the local and national level for policy and promotion.  According to a recent study by the U.S. Department of Commerce, aerospace exports directly and indirectly support more jobs than the export of any other commodity.  The U.S. aerospace industry directly employs about 500,000 workers in scientific and technical jobs across the nation and supports more than 700,000 jobs in related fields.  Investment in the U.S. aerospace industry is facilitated by a large pool of well-trained machinists, aerospace engineers, and other highly-skilled workers with experience in the aerospace industry.

Industry estimates indicate that the annual increase in the number of large commercial airplanes during the next 20 years will be 3.5 percent per year for a total of 34,000 valued at $4.5 trillion (list prices).

Large Civil Aircraft (LCA) – The United States is a global leader in LCA production and offers many opportunities for investment in the LCA supply chain.

Commercial Space – The companies in the U.S. commercial space market are major suppliers to U.S. Government programs, where demand has remained stable during the commercial aerospace and global economic downturns.

Engines - Major engine and power plant manufacturers are typically part of diversified corporations producing engines for both civil and military aircraft, either alone or as part of one or more joint ventures.  Engines and power plant sales also provide maintenance, repair and overhaul business opportunities.

Unmanned Aircraft Systems (UAS) - Given the rapid growth of military and civil governmental UAS operations, there is tremendous potential for the U.S. industry in the evolving commercial UAS sector.  Moreover, the November 2013 release of the FAA’s “Roadmap for Integration of Civil Unmanned Aircraft Systems into the National Airspace” and the interagency-backed “UAS Comprehensive Plan” (along with the release of the Notice of Proposed Rulemaking on Small UAS and the announcement of the six U.S. UAS test sites targeted for 2014) demonstrate the U.S. Government’s commitment to supporting civilian UAS development.

Airport Infrastructure/Aviation Security - Airport infrastructure and aviation security markets continue to grow both in the United States and abroad.  At the 38th International Civil Aviation Organization (ICAO) Assembly in the fall of 2013, the Assembly formally endorsed the proposed Aviation System Block Upgrade (ASBU) roadmaps for modernization of the global aviation system.  The ICAO ASBUs provide a rational framework for planning of air traffic management upgrades in the future that emphasizes harmonization of technology and procedures.  U.S. companies are poised to implement solutions that meet these new requirements.

Along with infrastructure growth, the evolving security needs both within the United States and throughout the world are driving demand for aviation security technologies.  The 38th ICAO Assembly also addressed aviation security with the hope of establishing a global baseline.  This baseline would include the implementation of risk-based security, the sustainability of security measures, and air cargo and mail security.  Similarly, the U.S. Transportation Security Administration has embraced risk-based security as a means of addressing security needs in an efficient and effective manner.

Alternative Aviation Fuels – Demand for alternative fuels in the aviation sector is increasing due to the price volatility of traditional jet fuel, and concerns about the effect of aviation on the environment.  The United States is a leader in alternative aviation fuel research and development, and U.S. producers have successfully completed test flights using fuels from a variety of feedstock.  These fuel producers are actively seeking investment as they move towards commercial production.

The National Space Policy: President Obama’s June 2010 National Space Policy puts a strong emphasis on the use of commercial space capabilities and international cooperation to meet U.S. Government mission requirements.  This will give U.S. commercial space companies the opportunity to provide new services to the government, such as transportation of cargo to the International Space Station as well as human transport for exploration.  The Administration is conducting an ongoing review of related sectoral policies on space transportation, satellite remote sensing and space-based positioning, navigation, and timing.  The review is intended to ensure that those guidelines reflect the National Space Policy’s objectives, such as industry competitiveness and increased international cooperation.