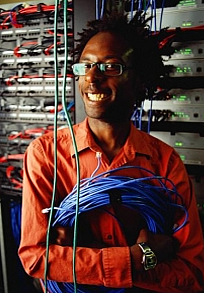 The United States has the most advanced software and information technology (IT) services industry in the world.

The industry has increased its revenue by an average of six percent between 2010 and 2011, totaling $606 billion in 2011. Overall, research and development spending in the United States information and communications technology (ICT) sectors increased by 6.3 percent to $126.3 billion in 2011. The United States accounts for more than 55 percent of global ICT research and development.

There are more than 100,000 software and IT services companies in the United States, and more than 99 percent are small and medium-sized firms (i.e., under 500 employees). This total includes software publishers, suppliers of custom computer programming services, computer systems design firms, and facilities management companies. The industry draws on a highly educated and skilled U.S. workforce of nearly two million people, a number which has continued to grow during the past decade.

U.S. software firms operate in a mature, harmonized market and have a reputation for producing reliable and effective solutions that accelerate quickly to the marketplace. International companies in the industry have shown a keen interest in the U.S. market because of its strong intellectual property rights laws and enforcement. U.S. companies lead the world’s packaged- and custom-software markets, and are competitive in nearly all other market segments with a relatively stable overseas market share.

The International Data Corporation (IDC) estimates that U.S. demand for software will increase more than 7 percent to $163.9 billion in 2012, and that demand for information technology services will rise 4.2 percent to $235.6 billion from the previous year. IDC surveys show that infrastructure projects are high priorities for U.S. businesses, and interest is growing rapidly in collaborative tools, green information technology, cloud computing and mobile applications.

Cloud Computing Services: The IDC expects that global revenue from public cloud computing services will grow four times as fast as information technology spending generally, increasing by 27.6 percent year-on-year from $21 billion in 2010 to more than $76 billion in 2015. The U.S. market currently represents about half of this demand, and U.S. companies routinely dominate the annual rankings of cloud services providers.  Software vendors and developers will benefit from this expansion as Software-as-a-Service (SaaS) products are hosted on clouds.

Entertainment Software: Combined revenues in entertainment software from computer and video games expanded by 10 percent from 2005 to 2009 to $10.5 billion. The subsector employs more than 120,000 people directly and indirectly.

Electronic Commerce:  Use of the Internet for selling and buying retail products continue to expand across the globe at an exciting pace.  The United States is a leader in electronic commerce or “e-commerce”.  According to statistics compiled by Census, U.S. retail e-commerce spending for 2011 reached $195 billion.