For more than 50 years, the U.S. semiconductor industry has been at the forefront of worldwide technological development. 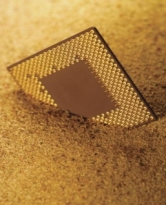 Faster, cheaper, and smaller semiconductors have benefited all industries and services, and transformed communications, transportation, and entertainment. Doubling of transistors on integrated circuits has created technological innovation and led to new products, economic growth, productivity gains, and new industries.

The industry ranks at the top of all U.S. exporting industries in recent years and maintains a trade surplus. U.S. total exports of semiconductors were $42 billion in 2012.

The U.S. semiconductor industry generated global sales of $151 billion out of a $292 billion total market in 2012.  Sales of semiconductors consist of direct U.S. exports and sales by U.S.-owned subsidiaries overseas and take into account U.S. based R&D, creation of intellectual property, design, and other high-value added work not necessarily captured in shipment and trade data that reflects only the movement of goods.  Increasingly, semiconductor technology has become global through such channels as overseas patenting, licensing, and other forms of technology transfer, and alliance strategies and international investment.  Over 85 percent of U.S. semiconductor industry sales occur overseas and the U.S. industry share of the global market was 52 percent in 2012.

The Nanoelectronics Research Initiative (NRI) is the premier U.S. R&D semiconductor program and is managed through the Semiconductor Research Corporation. The NRI supports university research to find a replacement beyond the limits of current semiconductor technology.  Robust research is currently underway in the United States to develop new technology that will lead a nanoelectronics era, much as the United States has led the microelectronics era for the past 50 years. Along with industry, the National Science Foundation, National Institute of Standards and Technology, and state governments and universities are in the forefront of the NRI.

Microprocessors:  These complex and innovative semiconductors are primarily used as central processing units in computer desktop systems, notebooks, servers, and workstations. The microprocessors are also used in the telecommunications, industrial, medical, automotive and consumer electronics industries.

Application-specific integrated circuits (ASICS): These circuits are customized semiconductors usually designed for one customer and application, and are found in the computer, automotive, industrial, telecommunications, and consumer electronics industries.

Microcontrollers: These are ICs designed for embedded applications in the automotive, communications, appliances, renewable energy systems, power management, medical and industrial equipment, and peripheral equipment for personal computers.  They contain a processor core, memory and programmable software and input/output devices.

Analog or linear: These semiconductors are used to handle real-world signals (sound, light, heat and pressure) and assist digital circuits to convert into digital language.  The telecommunications industry is the major consumer of analog semiconductors.

“Fabless” sector: This sector is comprised of leading U.S. firms that design chips for many applications including wireless and consumer electronic products, and whose designs are then fabricated by other companies known as semiconductor “foundries.”