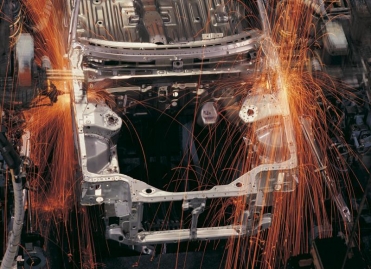 Since Honda opened its first U.S. plant in 1982, almost every major European, Japanese, and Korean automaker has produced vehicles at one or more U.S. assembly plants.  In addition to Honda and the big three U.S. auto companies - General Motors, Ford and Chrysler - Toyota, Nissan, Hyundai-Kia, BMW, Mercedes-Benz, Mazda, Mitsubishi, and Subaru all have U.S. manufacturing facilities.  In May 2011, Volkswagen opened a new U.S. plant, bringing the manufacturer count to 13.  In addition, many manufacturers also have engine and transmission plants and are conducting research and development, design, and testing in the United States.  The automotive industry, including dealerships accounts for approximately 3.5 percent of U.S. gross domestic product.  Motor vehicles and parts manufacturers directly employed 786,000 people at the end of 2012.

There is an extensive network of auto parts suppliers serving the industry.  Suppliers produced $225.2 billion in industry shipments in 2012, accounting for nearly 4 percent of total U.S. manufacturing.  According to a study by the Motor & Equipment Manufacturers Association in collaboration with Information Handling Services, the total employment impact of the auto parts industry was estimated at over 3.62 million jobs directly and indirectly nationwide in 2012 - more jobs and economic wellbeing than any other manufacturing sector.

Despite challenges within the industry in recent years, the U.S. automotive sector is at the forefront of innovation.  New research and development initiatives are transforming the industry to better respond to the opportunities of the 21st century.

In 2012, the United States exported approximately 2.6 million vehicles valued at $63 billion to more than 200 countries around the world, with additional exports of automotive parts valued at approximately $75 billion.  With an open investment policy, a large consumer market, a highly skilled workforce, available infrastructure, and government incentives, the United States is the premier place for the future of the auto industry.